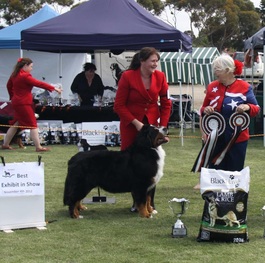 "JIMI"  has made us so proud again. He won Best in Show under Breeder/Specialist Judge Sandra Novocin of 'Santera' Bernese in the USA.
JIMI also got his final points towards his Australian Championship title, and will now be known as 'Rom. GrCh POL/RUS/AUS Ch. JIM JUM z DEIKOWEJ DOLINY (Imp. POL)'
Thank you to Teresa for entrusting this wonderful representative of the breed to us in Australia! GO JIMI GO!!

Thank you to Mrs. Sue Swalling (SA) for awarding "Jimi"  Best of Breed  & Best in Utility Group 1st!!!
"Jimi" then went on to win Best Intermediate in Show, under Mr. Eric Soti.  Thanks for recognising our boy :)
Also worth mentioning was that our young girl "Poppy" won Best of Breed at the morning show, against a good lineup of other Bernese (including JIMI !) and was "Run" for the Group also!  Not bad for our 19 month old girl! A great day for Malicloy in the show ring.... 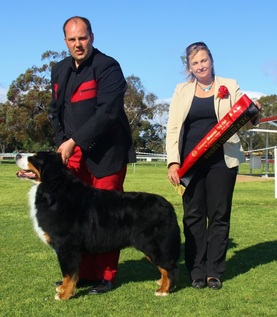 ‎"JIMI" has made us proud again at only his second show in Australia. He won Reserve Best Male Dog at the BMDCSA Bernese Specialty Champ Show under respected Breeder/Specialist Judge Maija Heinilä from Norway with an entry of 70 Bernese!
She said of JIMI - "Excellent in type; Well presented; Gorgeous head and expression; Dark eyes; Good layback of shoulder; Enough angulations in hindquarters; Moves soundly from all sides; Excellent bone; Good coat & colour; Excellent temperament." 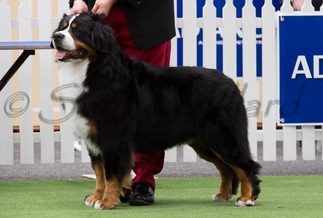 "JIMI" - Rom GrCh,Rus, Pol Ch. JIM JUM z Deikowej Doliny (Imp. POL)
At Jimi's debut show in Australia with a record Bernese entry of 58 he wins "Best Male" Dog and Runner Up Best of Breed under International Judge Mr John Muldoon (Ire.). This Dog Challenge awarded JIMI 25 points (The maximum attainable in any one show) towards his Australian Championship title. We are so proud of this boy and can't wait to see what the future brings. 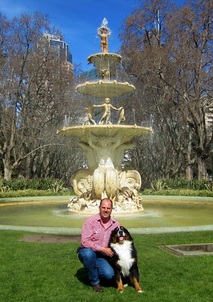 After what seems an eternity, "JIMI" has finally come home to our house in South Australia. Before leaving Melbourne where JIMI was in Quarantine, we visited some of the sights. The photo to the left is of JIMI at Melbourne's Museum and Art Centre.
We are delighted with JIMI and we are so grateful to our friends in Poland, Florian & Teresa Deik for sending JIMI to us. He is a wonderful example of the breed and we are so lucky to have him with us in Australia. 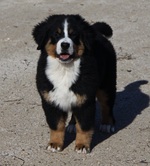 'Hilda' in Australia at 4 months
'Hilda' left on her big journey to our friends in Poland, Teresa & Florain Deik of DEIKOWEJ DOLINY Bernese (Where our new import "JIMI" comes from).
We know she will keep them entertained as she has done us for the last 6 months. She is such a lively puppy and very happy. We wish her all the best and hope to see her again in Poland next year when we visit. 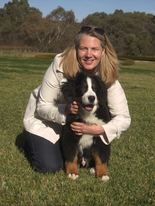 Lisa Ebnet with 'Richo'
Our dearest 'RICHO' has finally left us to be with his new family in the USA. We sure hope Lisa Ebnet and her son Logan will have as much fun with him as we have. He is such a sweet boy. We hope that Richo soothes the pain for Lisa and her family in the recent passing of Richo's father EBNET'S MOJO.
We can't wait to see photos and get updates on this special boy. 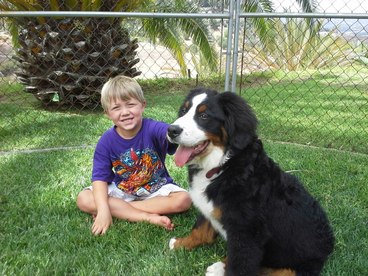 Logan with 'Richo' just after he arrived at his new home in Southern California. 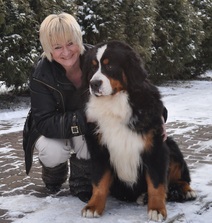 JIMI with his proud Breeder, Teresa Deik
Finally after a much anticipated wait..... "JIMI" - Rom Gr Ch. Rus Ch. Pol Ch. JIM JUM z Deikowej Doliny (Imp. POL) has arrived safely in Australian Quarantine.  We would like to say a huge thankyou to Florian and Teresa Deik of 'Deikowej Doliny' Bernese Mountain Dogs in Slupsk, Poland.  It was a Mammoth task arranging for JIMI to be transported from Poland and we would like to thank JETPETS of Australia and VCK LIVE ANIMAL LOGISTICS of Amsterdam for seemingly make happen what at times seemed impossible!  They moved 'Heaven and Earth' to make possible JIMI's arrival into Australia.
We visited JIMI in Quarantine today upon his arrival and he is phenomenal ......everything and more than we could have ever imagined!
Thankyou Teresa & Florian!!

We welcome you to look through our new website.
It contains a lot more information and we hope it is easier to navigate.
If you have any questions or additional information pertinent to our site, please feel free to e-mail  us. 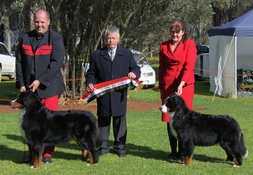 A fantastic day was had by myself and Holly Taylor of 'Malicloy Bernese' at the South Australian Regional Specialty Show at Virgara Winery. I was so proud of all our dogs! All 5 of our dogs won first place and took all the top honours! Best In Specialty Show (BISS) was won by our "Lucy" (Ch. Vegamo's Lady Of The Midnight Sun (Imp. NOR)). Runner Up BISS was "Poppy" (Vindissa Passion Pop) and Best Opposite of Sex and Dog Challenge was won by our homebred boy "Derek" (Ch. Malicloy Blue Steel). Best Baby Puppy In Show was also won by our dearest "Friedrick" (Malicloy Espresso Mojo). We cannot thank enough Mr Jim Black for awarding our dogs the top honours and we would like to thank the combined efforts of the SA Bernese, Pyrenean & Newfoundland Clubs for putting on such great shows for each of our breeds! 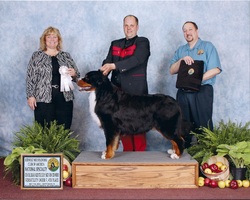 Ch. Oleka's Kentucky Sky CD, RE, RDD ("Loui") at the BMD American National Specialty winning 4th place in a very tough Versatility Class.
Thank you to Angela & Joe Evans of 'Oleka Bernese'  for trusting me to Groom/ Present and Show "Loui." He is a gentleman and moves with the true power and impulsion that a Bernese should. Never in all the time I've shown, have I had a dog on the lead that moves so effortlessly but with such power and drive. It felt great! A credit to Angela and her breeding program. 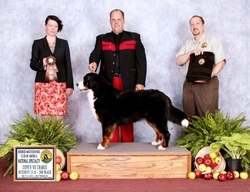 Thanks to Tuuli Yrjonen of 'Funatic Bernese' for awarding such a beautiful bitch as "Macie" (Cope's No Charge) at the BMD American National Specialty. It was a delight to show her and place 2nd in a large class of 32. I also thank Nancy Copestick of 'Cope's Bernese' for letting me show Macie, having not met me prior to the National. A "Leap of Faith" on both of our parts!