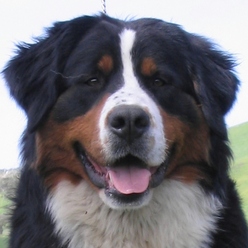 Phoebe @ 2 yeas
Phoebe was the first bitch to be owned by Malicloy Kennels and she fulfilled our every dream. We had high expectations for Phoebe and she exceeded them all. Phoebe has been retired from the show ring as of mid 2009 aged 5, and will spend her remaining days living the life of luxury at Ben's mum's place at a small seaside town named Middle Beach. We owe a great deal of thanks to Lyn Brand from Branbern Kennels for entrusting to us a bitch, which has the benefit of her lifetime's knowledgeable breeding.

Phoebe's mother is dam is Branbern Dime N Chime ('Ziggy') and her father is Australian Grand Champion Branbern Abbeys Echo ('Derby') who is a multi best in show winner at both All Breeds and National Specialty Shows. Derby was the first Bernese to attain his Grand Champion Title and also produced the 2004 best of breed winner at crufts in England ('Jackson').

Phoebe won countless awards for Classes in Group and Classes in Show, too numerous to number. Phoebe made a name for herself in South Australia when Bernese were not a very well recognized nor awarded breed. Phoebe won Best Opposite of Sex at the 2008 National Bernese Specialty and came close to winning Bitch challenge at the 2009 Specialty but went lame in her hip after winning the Open Bitch Class. It is for continuing lameness reasons that Phoebe has been retired from the ring and was never used as our foundation Bitch here at Malicloy. The decision was made to use Phoebe's sister 'Hayley' as our foundation bitch as she had sounder hips to breed on with.

Phoebe is a very pleasing dog to the eye and has a very affectionate friendly nature. Her head is broad and very expressive, using her ears well, she could however have a little darker eye. Phoebe is broad throughout and is well sprung in the ribcage. There is nothing excessive about Phoebe and she is well proportioned being a good size for a bitch. Her coat is silky/plush and soft like it should be, a shame it never got to any great length! Phoebe could do with more angulation in her forequarter and hence her neck is a tad short. I love the fact that all four of her feet point in the right direction....Forward!!! She has the best tail set and carriage of all the Bernese I've ever owned. (A problem I believe that is creeping into the breed without much concern by many people.) 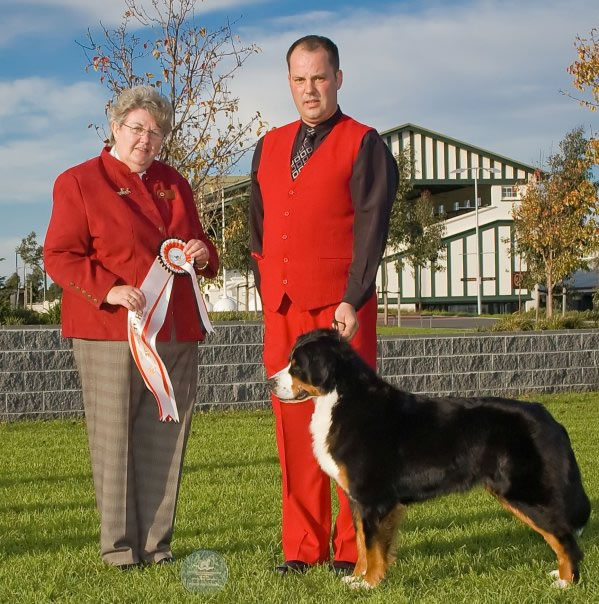 Phoebe winning Best Opposite Sex at the BMDCV National Specialty