We live on the beautiful Southern Fleurieu Peninsula of South Australia
with our daughter 'Millie' & much adored family of Bernese Mountain Dogs....
~ Welcome to our website... Enjoy! ~
Regards, Ben & Holly Taylor 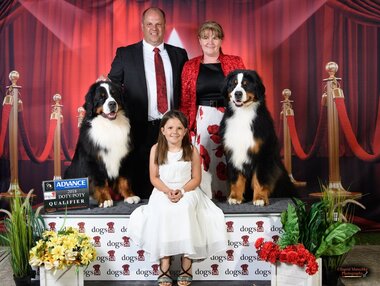 We are so proud of our meticulous presentation, grooming & showmanship...

HOLLY previously owned her beloved Gordon Setters from 1996, competing regularly in Conformation Shows and Obedience Trials.   In 2009 she met Ben & his beautiful Bernese and they married in 2010!  Prior to meeting, Ben & Holly each individually grew up with & had a childhood passion for horses, particularly the Clydesdale, and had both previously owned these Gentle Giants, competing in All-Breed & Royal Shows, Harness, Dressage, Eventing, Hunting & also operating Horse-Drawn Weddings.
Holly is currently studying to become a Specialist Judge of the Bernese Mountain Dog.

"Malicloy Park" is our beautiful 162 acre property, located at Wirrina Cove, 85kms south of the city of Adelaide.  Wirrina Cove is a mid-19th century sheep farming settlement that is more recently known for the Resort, Golf Course and Marina Complex built in the mid 90's and is also known for it's rural atmosphere so close to the ocean and the wonderful white beaches. We are nestled within the valley, alongside the Anacotilla River...